Regina King is currently starring as part of an excellent ensemble cast on the superb police drama SouthLAnd, which premieres January 17th on TNT at 10 pm eastern.  We recently had the honor of obtaining an exclusive interview with her and discussed SouthLAnd, Twitter, future projects, etc. 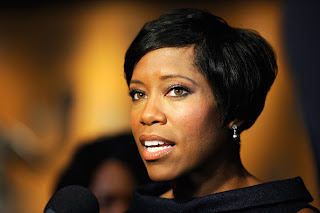 SouthLAndFirst (SLF):  Lydia Adams is an intriguing character. How would you describe Lydia?
Regina King (RK):  Passionate. Serious. Compassionate to a flaw.
SLF:  What has been your most difficult SouthLAnd scene to film, either physically or emotionally? Why was it so difficult?
RK:  Hands down, it would be the last scene I shot with Tom Everett Scott. Because it was a scene where Lydia discovers something that makes her dislike one of her favorite people and it was the last scene I was going to have with one of my favorite people.
SLF:  How do you like interacting with your fans on Twitter?
RK:  It’s tough because I wish I could respond to every person that sends me a tweet.  Most people have nothing but positive, loving tweets and you can't help but to want to pay it forward and say thank you to every person that takes the time to send a tweet. So it was rough in the beginning, because I felt bad that I couldn't.
SLF:  Through the first three seasons, the show has been relatively vague about Lydia's past. Will we learn more about her personal back stories this season?
RK:  There will be a bit more that gives insight into Lydia's past but she is still peeling back layers slowly.
SLF:  Is Rodrigo still in the picture?
RK:  I'm not sure.
SLF:  Do you have a favorite scene from the first three seasons?
RK:  I love the show. It's pretty impossible to narrow it down to a few.

SLF:  Can we have some reveals about what you have filmed so far?  Spoiler free, of course.
RK:  Marla Gibbs will be in an episode. She was my television Mom on the show 227. We all have new partners. But I think everyone who is already a fan of the show knows that already. Anything else...you will have to tune in starting January 17th to find out. *laughs*

SLF:  You have done some producing and directing. How do you like those experiences as opposed to acting?
RK:  I enjoy directing and acting the most.  But all positions are quite different. Obviously I am a novice when it comes to producing and directing, but I feel like my experience as an actor has helped me have a better understanding of the two.
SLF:  The video “Not My Daddy” is up for an NAACP Image award nomination. That must be an amazing recognition for you and all involved.
RK:  Yes It is exciting to be behind the lens. It was the second video I directed. Jaheim "Finding My Way Back" was the first. They both were exciting because both artists trusted me and allowed me to write the treatment. I have been fans of both Kelly and Jaheim for a while so while both were fantastic learning experiences. It was an honor to participate in both.
SLF:  What do you do to de-stress from the demands of your hectic schedule?
RK:  I go to the gym. Which I don't particularly like, but it’s an awesome way to release stress. I try to get quiet time in when I can.  I’ve recently started practicing TM (transcendental meditation). Sometimes it’s hard to find the 20 minutes twice a day to meditate, but when practiced consistently it makes a huge difference.

SLF:  Do you have any future projects you want to let the fans know about?
RK:  I’m crossing my fingers I will begin production on a film when we wrap on SouthLAnd in March.  It will be the first film I will direct. I'm excited about it but can't share the details until the dotted line has been signed.
SLF:  Would you like to add anything else?
RK:  Thank you! *winks* 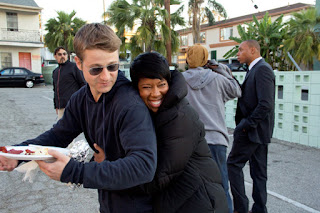 Thank you so much, Regina, for the exclusive interview.  We can't wait for the premiere - which is just one week from today!
Posted by SouthLAndFirstTeam at 9:59 AM