Where to begin? Heart thumping, head spinning and “What?!?” gasps throughout this incredible episode that was shot and framed brilliantly by director Felix Alcala and DP Jimmy Muro. The use of close-ups was the most compelling ever in the show's history. SouthLAnd never fails to leave it’s viewer in shock and awe. “Community” was no exception.


Ben is still feeling the fallout from punching the teenage girl last week. He’s now a You Tube sensation and his notoriety is bringing him plenty of action with the ladies.  He and Sammy are sent by Captain Rucker to contain “Hood Day”, a day where each gang celebrates the anniversary of their creation.  Sammy’s lack of interest in his old turf leads to tragic consequences for several people. This entire storyline of the episode is somehow convoluted; Sammy is “off”: behaving irresponsibly and Ben seems to be going right along with him, though at times reluctantly. Are our two youngest beat cops on a downward spiral? 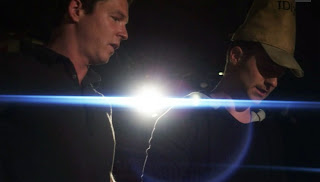 Cooper and Tang deal with a robbery in a Jewish neighborhood, bringing one of the best Coop quotes of the episode, “My old partner would have jumped” as the suspect flees the scene while the two officers watch from an upstairs balcony. (Side note: That scene also contains what makes SouthLAnd so unique - attention to detail. You can hear a clock ticking and the squeak of their leather holsters as the officers ascend the stairs.) In another encounter, Coop and Tang are asked by a convicted child molester for protection from his persecutors in his new neighborhood. This brings to the surface feelings Coop has tried to subdue; we recall through his eyes, tone of voice and mannerisms the remembrance of his father. There will be no sympathy for this man. Tang seems to agree. The episode ends with the pedophile’s home being burned and Coop radioing in “Show us code six…431 West Lake.” On the scene, handling. They are good cops; job first, personal feelings far down the line. 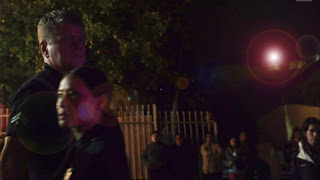 Lydia and Ruben have one case; A brutal murder investigation involving a woman who was apparently signing people up for debt consolidation and then defrauding them. The most touching scene of the episode is when Ruben recalls his daughter’s birth and Lydia assures him that what he just shared is his speech for his daughter’s quinceanera. Theirs is an easily flowing, very workable partnership. 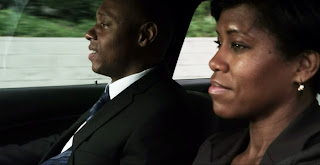 Regarding Lydia, the previews for next week’s show reveal it is not to be missed. Enough said.


SouthLAnd just gets better with every episode. You think it is impossible for it to exceed its own standard of excellence. This show proves nothing is impossible.
Posted by SouthLAndFirstTeam at 10:15 PM