“Legacy” review
An episode written by Heather Zuhlke and directed by Jimmy Muro? It’s a winner from the opening credits. Neither ever disappoints in their efforts; add in the always stellar cast and we have yet one more epi in which to be in awe.
This week, Sammy and Ben slowed down the run and gun pace with a series of pranks on one another; Ben hiding Sammy’s towel after his shower in a duct taped locker, Sammy having a waitress, one of Ben’s lovers, tell him she is pregnant, Ben putting birds in Sammy’s car (over the top!). Pranking appears to be a common practice among real life cops. It was very nice to see these characters’ scenes end in laughter instead of some sort of bloodshed or mishap. 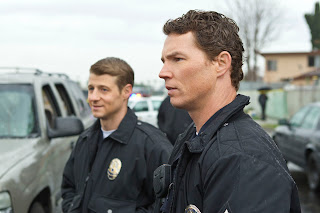 Lydia and Ruben investigate what appears to be a home invasion resulting in the murder of a 30 something, still living at home with his dad. Guest star Joe Regalbuto as the father gave a heart wrenching performance, ultimately confessing to killing his own son because he was afraid his torture porn addiction would turn him into a serial killer. As shocking as that may seem, Ruben sums it up, “Children are a reflection of who you are...” Lydia continues to deny her pregnancy to Ruben but he is clearly aware something is going on. Being a married man and father himself (plus a detective), he sees the clues. 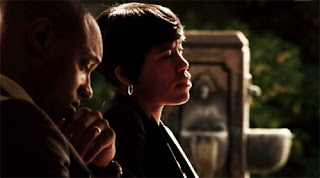 Ultimately though, this episode belonged to Michael Cudlitz, the unanimously critically acclaimed backbone of the show.  John Cooper is recognized for 20 years of service (He’s really served 22) and he hopes to earn six stripes (30 years) plus one day.
The scenes with the gay teenager are where Cudlitz’s acting chops shine the brightest. Coop and Tang are called to a domestic disturbance where the parents want their son Mike to transfer schools because everyone knows he is gay; they fear the repercussions for him and themselves. The look of fear and familiarity of what the kid is going through is transparent on Cooper’s face.  Later that day, after being beaten at school by bullies and forced to wear a dress, Mike is going to jump off the ledge of a hotel. Coop tries to talk him down, admitting he himself is gay and “It's gonna gets better.” This is the first time Coop has confirmed his sexuality publicly; Tang and two other officers are within earshot. Mike ultimately jumps but Coop is able to grab his ankle and the other officers help in pulling him back. At the hospital, Coop gives Mike a final piece of advice regarding his sexuality, “I’ve got a lot of problems, kid. Being gay isn’t one of them.” Coop’s private life is his own and he has no issue with it. As he told Mike when they first talked, "You can be who you are without making yourself a walking target." 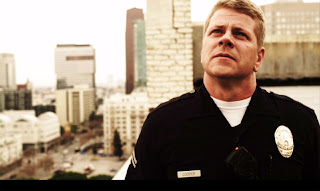 The ending scenes show Cooper and some of his fellow officers having a celebration at O'Malleys. As they recall on the job stories, there is laughter and much appreciation for John’s years on the force.  Coop leaves with Tang following him out, relaying the sad news that yes, Mike did manage to leave his hospital bed and commit suicide by jumping off the 14th floor.  We see on Coop’s face the knowledge of 22 years on the force: “I can't worry about what happens to him after I leave him."  Tang renters the bar for more revelry and Coop stands outside the door, listening to Dewey recall a particular incident. This is where Cudlitz gets you as an actor: he doesn’t even have to speak. His eyes and facial nuances are so touching it makes your heart hurt. We know Coop’s legacy thru Cudlitz’s portrayal – he’s a good cop and will be remembered as such. Give Michael Cudlitz his Emmy already. He is way overdue.

Random musings:
-       SouthLAnd does on an episodic basis what no other drama seems to be able to do; add humor when you least expect it and in a very delicate yet deliberate way. We laugh at “Mary” who has lost her son Jesus who was kidnapped by Judas then we are segued into the scene of a shooting victim in a car and it is all done seamlessly. It just fits and it is a hallmark of this show.
-       Usually appreciated but not mentioned in reviews is the always fantastic stunt team, including the cast doing most of their own stunts. This episode again showed the fearlessness of all involved. Kuddos to Emmy award winning stunt coordinator PeeWee Piemonte.
-        The episode ended with a song playing as Coop leaves the bar alley (Tears for Fears “Everybody Wants to Rule the World”), a rarity for SouthLAnd. Hopefully, this is not some sort of foreshadowing.
-        The only episode thus far this season where no shots were fired.
Lucy Liu has proven to be a low key and refreshing addition to the ensemble.
-
If you are reading this, you are probably already a fan of the show. Keep watching and tell a friend why. If you are a first time viewer, I’m betting you’ll be back for more.
Posted by SouthLAndFirstTeam at 10:57 AM