SouthLAnd First had the extreme privilege of recently interviewing iconic director Allison Anders. http://en.wikipedia.org/wiki/Allison_Anders   Allison has directed two episodes of SouthLAnd thus far; season three's "Sideways" and this season's "Fallout". She gave us personal insights and details into her episode of SouthLAnd this season; discussing the cast and crew, her choices in directing, and even that taco truck crash scene.

SLF: You often keep the camera close to the actor's faces - do you usually do multiple takes so they can try different ways/nuances of playing a scene?
AA: I generally do very few takes on my own movies, and I'm blessed that on Southland they like to work that way too.  I have to say that Jimmy Muro (Director of Photography & sometime episode director) ,when we work together, that is always his instinct, to go in close on the actors,  And maybe it's that the scripts I direct are always loaded with character crisis, so we tend to instinctively go there.  There are some of my favorites in this episode:  Michael Cudlitz on the bridge after Tang walks away, Lucy Liu in her apartment alone, and Regina in the car when she realizes her partner was right -- this girl's baby will end up in foster care.
SLF: The "colors" of this episode seemed so rich! Could you share with us the process of working with Jimmy Muro on the lighting and framing of a scene?
AA: I can't take any credit at all as much as I'd love to -- but that's all Jimmy and his crew.  But we do discuss, and he offers up ideas and we decide.  Like, when Cooper is waiting for Shuman to come in to question him on the shooting, I had said I really wanted something straight on Michael, cause Michael had told me what he was going to play in his nervousness waiting -- and I wanted to make sure we milked that for all it was worth!  So Jimmy said, "Okay Okay -- let's do a Wes Anderson."  I didn't know exactly what he meant, but when he set it up -- I cracked up -- cause it was SO Wes Anderson, and something you would never expect to find its way into an episode of Southland.  And that's Jimmy, man right there -- bold ideas -- and what works for the scene is worth trying.  And it worked so great without breaking the Southland vibe at all. 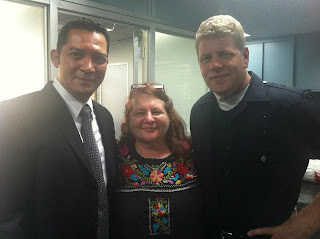 (Photo courtesy of Ms. Anders)
SLF: How much storyboarding /pre-planning was involved with the taco truck scene - and how many takes did it take to shoot?
AA: It was really a matter of committing to do the scene as scripted with the one truck crashing the other -- which is not a cheap thing to do! So the first thing we had to consider is -- how can we do this within the budget, but make it really awesome, and what Etan, the writer of the episode, had in mind.  J.P. the show's producer said some of the kitchens in those food trucks are $100,000 operations -- I had no idea, did you? The production designer Mazxine Shepperd had driven past a sort of food truck graveyard and said maybe THAT was a possibility.  So John Carpenter who is in charge of all the picture vehicles looked into it, got pictures for us and we looked at pictures together and all loved it, and the trucks were affordable.  Maxine's art department painted them beautifully and we were ready to go.  Next we had to find the perfect location, and Michael Hara and his team found us the perfect spot which is what is known as Mariachi Square in East LA.
Then Peewee, Southland's brilliant stunt coordinator, walked us through his ideas -- we never even really needed to commit it to a storyboard cause it was pretty clear how it would happen.   And the rest just really depended on everyone being awesome -- which they so were -- the stunt guys, the actor trying to save his truck, and of course Ben and Shawn and all the background players...and all the cameras being in the exact right spots cause we could only do it once!
Every time I look at it I'm so pleased.  I love how the drinks and ice and everything comes spilling out of the food truck when it's hit.  That was such a fun scene to shoot.  The day players in the scene were awesome too.  And it was really Shawn and Ben coming up with the idea of not putting the guy in the car yet, and arguing with each other with this guy standing there cuffed.  Loved it.
SLF: What part of directing do you enjoy the most?
AA: Oh god, I love production - working with the actors and crew - it's so exhilarating and I'm the happiest of my life when I'm on set directing.  I admire every single person who works on production and whether it's Southland or one of my own films, I really appreciate everyone's hard work and great ideas.
SLF: Do you have a favorite scene from this episode?
AA: Well, I love the episode, but I gotta say for me, I got to direct a scene similar to Regina's last scene with her partner last season in terms of drama and great, great acting -- and this episode it was Michael Cudlitz in the alley with his sponsor.  That killed me. I knew it was going to be powerful cause of how it was written and that Michael would be giving all his heart to it -- but I was stunned when we shot it. And how blessed were we to have Lawrence Gilliard, Jr from "The Wire" in that scene???
When the sponsor says to Cooper "I thought you'd seen it all" and that's key -- because as you Southies know -- yes Cooper has seen SO MUCH.  But this is a crisis of conscience for him, and that's very powerful.  Etan wrote such a beautiful script which was full of so much space for actors to fill in -- pretty extraordinary. I also LOVE the final scene in the episode with Ben and Shawn when Ben mentions Nate -- they both killed it in that scene.
Lucy's last scene was really beautiful too, and I loved her scene on the bridge with Michael.
AND I love the more playful stuff too -- I love Regina and Dorian with the little old lady who hadn't driven her car since she went to vote for Obama.  Regina has such an adorable smile, tickled by her -- and she really was tickled by her for reals.  And Dorian was awesome and funny too in that scene, I loved it.
And of course - the food trucks!! 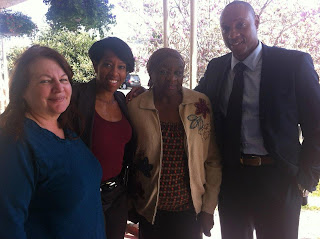 SLF: Anything you want to add?
AA: SEASON FIVE please!
We at SouthLAnd First hardily thank Ms. Anders for her time and graciousness in granting us this interview. It is our hope she directs many more SouthLAnd episodes in the future!
We'd also like to thank Darren Croucher for his contribution.
Posted by SouthLAndFirstTeam at 10:31 AM