Partnerships formed. Partnerships united. Partnerships fractured.
With the emphasis this SouthLAnd season being on partnerships, we appear to be at an important juncture in episode seven; which partnerships will survive their fallout?
Currently, Lydia and Ruben seem to have the best odds for survival. As the duo investigates a murder of an addict killed by his pregnant girlfriend, Ruben remains firm in his belief that Lydia is pregnant. How much longer can Lydia hide her “condition” and why does she want to? It’s clear she is going through with the pregnancy; her hesitancy to acknowledge this to her boss and colleagues is becoming baffling. Dorian Missick was particularly compelling in this episode, giving one of his best performances this season. 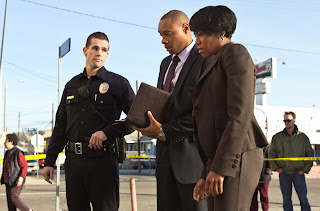 Sammy, unable to forget or seemingly forgive Ben for the crack pipe incident in episode six, is a bit baffling as well. As this duo deals with a taco truck accident, a crazed homeless woman and a bar mitzvah celebration, Sammy continues his passive aggressive behavior towards Ben, refusing to acknowledge his apologies (and this after Ben has even bought the house in Castaic). After apologizing for the umpteenth time, Ben lays down this ultimatum in his final scene with Sammy, “Savor this one; it’s the last one you’re gonna hear.” 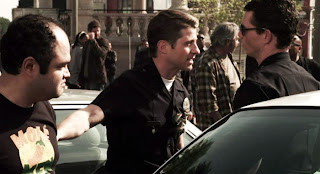 Tang and Cooper are in the most difficult of situations. The two officers respond to a home invasion call. They split up trying to catch the perp in foot pursuit. Tang chases the man through a yard and climbs over a fence; when a teenage boy emerges from his home wearing a similar hoodie to the perp's and is carrying a toy gun, Tang shoots him. Coop arrives after the shooting; the actual perp being apprehended by assisting officers. Coop does not see that Tang has removed the orange tip from the toy gun but, he has a very strong suspicion. Tang’s reasoning for lying to investigators of the shooting is once again baffling. It was an accidental shooting; why doesn’t she just tell the truth? Does she not want this on her record as she is soon to take the sergeant’s exam? Coop’s reaction is also baffling. “Stick with what you saw” Tang tells him after the FID investigation when Coop implores her to tell the truth. We assume Coop does not share his suspicions with the investigator and it clearly is troublesome to him because he is very close to the edge of narcotic use again to dull this emotional pain. Wisely, he chooses to attend a Narcotics Anonymous meeting instead. 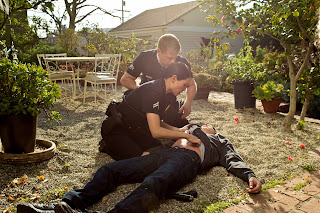 So, we are left baffled by many questions. Typical SouthLAnd. Nothing is ever tied up with a pretty bow.
One thing that was perfectly clear in “Fallout” was the hand of iconic director Allison Anders. Her touch was felt in all elements of the episode: the lighting and framing of scenes, the raw emotion from each actor and the ever so subtle way of telling the story. There is an underlying tenderness throughout this episode; it’s seen in Sammy’s response to the kid wanting to impress the girl at his bar mitzvah, Ben’s comforting words to Crazy Carol as he cuffs her (“You’ll be alright. It’s gonna be ok.”), Coop asking “How’s the kid?” before his FID questioning and in Lydia’s expression after she tells the killer her unborn baby will ultimately be placed in foster care. SouthLAnd’s cast is brilliant; Ms. Anders made them even more so. 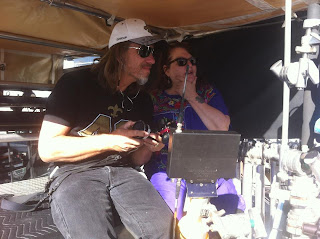 (DP J. Michael Muro and Ms. Allison Anders
Photo courtesy of Ms. Anders)
Three more episodes left this season. Hang on. The ride may get even bumpier.
Posted by SouthLAndFirstTeam at 5:47 PM