As we continue to tirelessly promote our favorite show during it's hiatus, one thing we will be doing at SouthLAnd First is looking back on various aspects of season four. Our goal is to post original content at least weekly so please check our site often.

This week, we begin a look at characters.

Sammy Bryant is first in the spotlight. 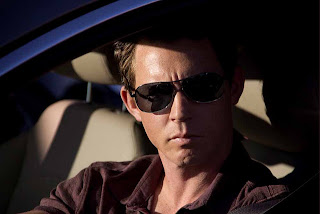 "It's like my dad said when I hit puberty...Samo if you are anything like me, you won't go to bed with any ugly girl. But you will wake up with a bunch." [Episode six]

Episode five "Legacy" was filled with comedic moments as Sammy and Ben pranked one another repeatedly and tussled with a midget but in our opinion, the diner scene where Sammy so seriously sets up Ben to believe he has gotten the waitress (his lover) pregnant was the best prank, and comedic moment, of the season for Sammy.

Our favorite Sammy scene was from "Thursday", the season finale. This pic sums it up: 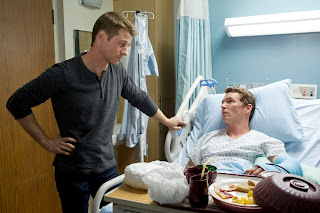 Shawn had only two scenes in the finale; he played this scene to perfection as Sammy struggles to stop Ben from doing what he knows he is about to do that day. The other scene at the conclusion of the episode was also spot on as Sammy stares knowingly across the pool at his partner.

Bravo, Shawn on another great season.

These are OUR favorites. Feel free to add comments as to your choices.
Posted by SouthLAndFirstTeam at 2:42 PM