As we continue our review of season four in preparation for season five, this post examines the character of Bill "Dewey" Dudek, portrayed by legendary actor C. Thomas Howell. Dewey has been the character since season one you love to hate (or you at least find him annoying or not at all politically correct) but you are still  amused, shocked or most certainly entertained by his antics. 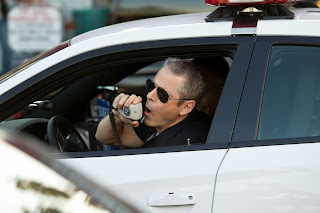 "Fat chicks are awesome. It's kinda like riding a moped. It's fun as hell until someone catches you on one."
~ Underwater 4.02

"Uncle Dewey" giving his best advice to officer Tang before she is set to appear before the Board of Rights concerning her shooting of a teen. 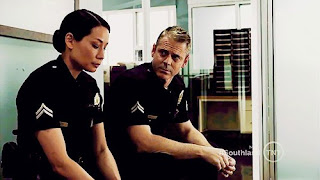 Again, a very difficult choice but we choose Dewey talking to the camera crew in "Integrity Check"

Dewey appeared in seven of the 10 episodes. His presence was missed in the other three. C Thomas delivers in every scene our beloved Dewey; whether that be the recovering alcoholic or sarcastic, annoying, angry or deep down heart of gold Dewey. Our hope is to see him in every episode in season five. Well done, C. Thomas Howell. You've been outstanding  in every season of SouthLAnd!

Posted by SouthLAndFirstTeam at 9:23 AM 5 comments: 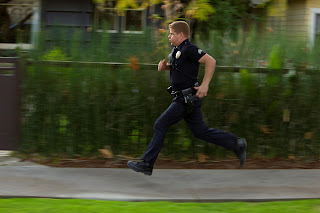 "TNT’s critically acclaimed police drama takes viewers directly to the streets of LA to present an intensely personal, first-person look at cops and detectives on the beat. The extraordinary show – starring Michael Cudlitz, Shawn Hatosy, Regina King and Ben McKenzie – has redefined the police drama genre with a raw, authentic look at the lives and work of detectives and beat cops. Southland is from John Wells Productions in association with Warner Bros. Television.
Special Programming Note: TNT will lead into the season 5 premiere of Southland with a marathon of memorable episodes on Wednesday, Feb. 13."

Posted by SouthLAndFirstTeam at 9:22 AM No comments: