Ben, Chickie, Cooper, and Chickie’s boot are involved in a shootout after a bank robbery. 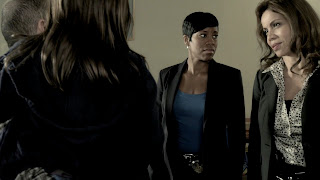 After confronting a gang boss and having to back off; Nate tells Sammy, “Better live pussies than dead heroes.”

Laurie refuses to give Cooper any drugs and asks him to seek rehab help.

Dewey is back from rehab and partnering with Cooper.

Dewey and Cooper discover a “sticky situation” at a motel.

Cooper steals Ben from Chickie and leaves Dewey behind.

Tammy has a boyfriend.

Josie and Lydia argue over how to perform police work.

Ben’s mom’s rapist is released from prison and Ben tracks him down and confronts him.

Lydia and Josie eat at El Siete and decide they no longer want to be partners.

Sammy and Nate go to a cockfight to find El Flacco leading to many funny statements about cocks.  “Suspect is running with his cock in his hand.”

Ben makes a lot of mistakes - wrong death notification; doesn’t handle a woman in a domestic violence situation and she throws grease at her boyfriend; loses a suspect.

Ben, Cooper, and 2 other patrol cops eat at El Siete.

Ben calms down a man in his underwear who has been tazed several times to no effect.  The man later jumps out of an ambulance onto the hood of Ben and Cooper’s patrol car.

As Nate and Sammy drive through a gang neighborhood, a bottle is thrown.  Nate gets out to confront the person who threw it.  The gang starts to close in and one of them hits Nate in the back of the head with a metal pipe.  Nate is rushed to the hospital where he is pronounced dead.

Lydia and Josie investigate a rape.

Cooper testifies at the parole hearing of his Dad.  “My father should stay in here until the day he dies.” 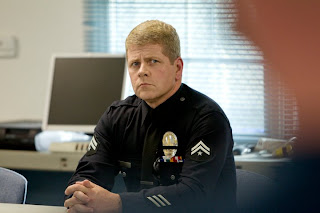 Sammy goes back to patrol work.

While eating at El Siete with Officer Jones, Sammy receives a call telling him that he is the father of Tammy’s baby.

Lydia is suspended for leaking photos of the celebrity murders.

Dewey:  “Blow jobs can save lives.”

Lydia stays at the hospital with a dying man who witnessed a murder.

Cooper:  “I find it novel, Dewey, every once in a while to give a shit.”

Dewey hits a pedestrian during a car chase.

Russ confesses to Lydia that he was the one to leak the photos.

Lydia and Josie have to babysit an alcoholic witness to a murder.

Josie and Lydia’s witness escapes their lunch to “get her swerve on.”

Sammy tries to bury Nate’s killer, Leprechaun, in the desert.

Lydia gets some help and advice from a cop at the shooting range.

Cooper tosses his pills down a toilet, but later has to buy more.

Cooper and Ben investigate a break-in at a woman’s house.  What did they steal, Ma’am?  My uterus.

Ben has to give information on car seats at a community center because Cooper is too zonked on drugs to get out of the car.

The cop from the shooting range asks Lydia out.

Josie and Lydia get involved in a factory shootout.  Lydia takes the advice of the cop at the shooting range, and kills the shooter with a two to center mass and one to the head.

Ben confronts Cooper about his lethargy.

Lydia discovers the guy who asked her out is Lydia’s son.  She gets involved with him anyway.

Roll call on the last day for boots.  Ben is assigned to Alvarado division.

Chickie also gets a new assignment in Metro.

Tammy has her baby.

Back on the ground, Ben angrily gives Cooper an ultimatum:  go to rehab tonight or take a drug test at work.

Ben drives Cooper to the hospital.  The nurse gets Cooper’s history and he tells her he takes, Vicodin, Oxycontin, and Percocet.  When she asks about illegal drugs, Cooper says, “No. I’m a Cop.”

Posted by SouthLAndFirstTeam at 5:44 PM