Recently, SouthLAnd First had the honor of obtaining an exclusive interview with SouthLAnd's legendary actor C. Thomas Howell, who plays veteran officer "Dewey" Dudek. Tommy is one of the stars of the amazing ensemble cast of the critically acclaimed police drama. He gives us some insights into his character, his thoughts on becoming a full time cast member and what we can expect from Dewey in season five. 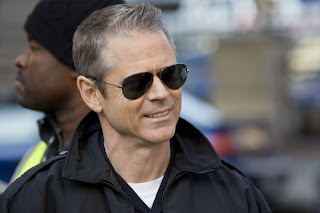 SouthLAnd First:  How exciting is it that Dewey will be in every episode this season?
C Thomas Howell:  For me it's fantastic. I find it a real challenge playing this character. There's a delicate line between love and hate when it comes to Dewey and the chance to explore that weekly is very exciting. I do feel Dewey is a bit like Cayenne pepper, though. A little bit is probably enough when it comes to the viewers!

SLF:  Will Dewey have a full time partner this season?
CTH:  Dewey is a training officer, believe it or not. Although his boots aren't a real focal point this season, there are some interesting points when it comes to his partner(s). I don't wanna give away too much. You'll have to tune in!

SLF:  Online speculation is that we will meet a very important member of Dewey's family in season five. Care to comment?
CTH:  Again avoiding spoilers, lets just say that no one was more surprised then me to find out Dewey has not one, but two daughters!

SLF:  What do we NOT know about Officer Dudek?
CTH:  That he is probably a much better cop then one would expect. We know he's a joker but he and Cooper connect on a much deeper level this season as friends. Their relationship has blossomed and I think Cooper tolerates Dewey to some degree more than others with the understanding that Dewey would take a bullet for him no questions asked. It's been very interesting to work with Mike Cudlitz this season and if we go to season 6, I think the two of us together full time would be very powerful! 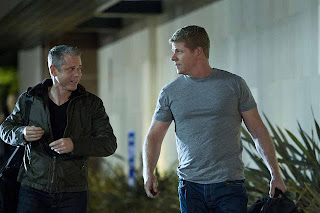 SLF:  Is Dewey still faithfully following the 12 steps?
CTH:  Straight as an arrow! Dewey is old school and when he commits, it's written in stone. Thank God too, because we've beat the hell outta the "struggling drinking cop" story lines in tv history, haven't we?

SLF:  Have you filmed a favorite scene yet?
CTH:  Yes, but I can't share it yet. Too soon.

SLF:  What does the character of Dewey bring to SouthLAnd?
CTH:  I think a sense of freedom and comedy for the writers. My job as a supporting actor is to make my costars better and that's what I do day in and day out. Playing Dewey is like being a fullback that makes great blocks for his running backs to carry the ball. But, every now and then you can give it to me on the goal line and I'll pound it in for six! I love my team and my position.

SLF:  If you could change anything about Dewey, what would it be?
CTH:  Nothing. Love him or hate him he's my favorite character that I have ever played. He's taught me to be fearless as a performer. He's taught me not to judge.

SLF:  How has the experience of working on SouthLAnd been?
CTH:  It's been a great process. I love my crew and the friends I've met. That's the best part of being on a show for five seasons. Lets do five more! 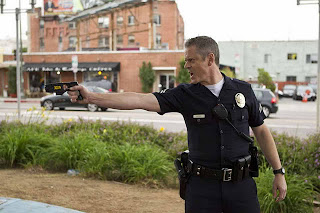 SouthLAnd First wishes to thank Tommy for graciously taking time from his busy schedule to grant us this interview. We'd also like to thank Sue Vorenberg (@explodingegg on Twitter) for her assistance.

Posted by SouthLAndFirstTeam at 10:48 AM