Genesis 11:9 " That is why it was called Babel—because there the Lord confused the language of the whole world..."

In episode three, the breakdown of the LAPD dispatch system adds to the confusion that already exists for law enforcement in the City of Angels: over four million people speaking 100 different languages.

This episode was owned by J. Michael Muro (epi director and DP), Shawn Hatosy and guest star Emily Bergl. More on why later in the review.

Lydia seems to be moving on quickly from her mother's untimely death; already packing up her mom's things and not missing a step at work. She and Ruben investigate the murder of a young man, the third son lost to a single mom...two of them drug related. Regina King has never given a bad performance - even the brief scene in the restroom where she talks on the phone to her son's father (Terrell) and later the encounter with Terrell's wife, we FEEL her pain and frustration. She is a flawless actress. It is heartening to see Lydia finally trying to bond with her son, Christopher. After the murder investigation of the episode, I think the realization that he is the only family she has left, the fact he is her very own flesh and blood and just how important it is to connect, has finally sunk in. 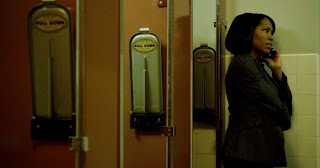 Ben seemed less arrogant and more compassionate this episode; a trend I hope that continues. He seemed to delight in the puppet "Stranger Danger" presentation to the elementary school children and seemed less annoyed with Sammy discussing his on-going woes with ex-wife Tammi. He, of all the characters, got to understand most intensely the "babel" and confusion in dealing with a multicultural population after the shooting and aftermath at the community center. 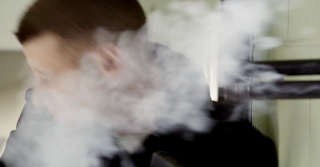 Cooper stops being an FTO ("I'm sick of hearing my own voice" he tells Sgt. Hill) and is riding now with a senior partner Henry "Hank" Lucero. They encounter several "babel" situations. An elderly lady assaults a skateboarder after he bumps into her, calling him a "schvartzer" (German for black, more commonly used in the United States as a substitute for the word nigger according to the Urban Dictionary).  A car crashes into a Filipino restaurant, the driver somehow clearly intoxicated and we have the beginnings of a "Dixie Cup Conspiracy" (per @RonnisTweets at Twitter). The driver babels scripture & the Filipino owner blames the mysterious "white lady." Later, we see gang members urinating on a deaf man; his babel being sign language. An erratic driver is stopped by Coop & Lucero; he is also a Dixie Cup conspiracy victim and his babel is Spanish...fortunately, Lucero can communicate. The Dixie Cup conspirator is a kid selling lemonade garnished with datura, a plant which leads people to hallucinate. Coop recognizes the flower later leading to Lucero's "Are you a closeted botanist?" comment. And their day continues. 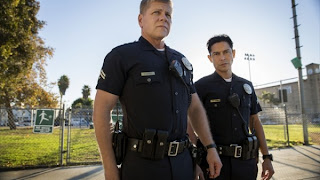 Dewey's boot literally gets clothes lined in pursuit of notorious gangster "Road Runner," his patrol car gets a graffiti job in the hood, and you can tell Dewey is old school and longs for a return to those times. Coop & Lucero catch Road Runner in a traffic stop, much to Dewey's delight ("I'm Officer Wile E. Coyote and we're going to fry your road runner ass"). And I don't think Coop ever got the "Bofa Deez Nuts" joke.

Sammy and Tammi have a violent encounter when Tammi fails to bring Nate to Sammy at the appointed time. Sammy stops by Victor's (Tammi's boyfriend's) apartment to confront her. Sammy and Tammi have always had a passionate, tumultuous relationship, both in marriage and divorce. This scene, played to perfection by Shawn and Emily, is in my opinion one of the rawest scenes ever shown on SouthLAnd...and there have been many. Her craziness & paranoia and his desperation & anger were palpable through the screen. Brilliant, powerful scene. Kudos to both actors. 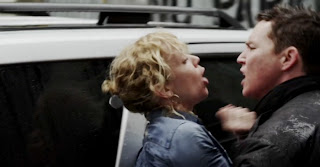 The ultimate star of every SouthLAnd episode he directs is J. Michael Muro. His use of lighting, framing and sound is genius. He's not afraid to shoot from odd or unusual angles (always capturing the gritty beauty of Los Angeles in the southland), put the camera in the actor's faces, capture every sound needed for the scene (Ben & Sammy's heightened breathing during the entrance into the community center) and he never abandons the run & gun documentary style of shooting that is off the hook for episodic television. 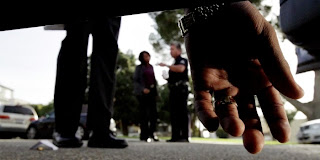 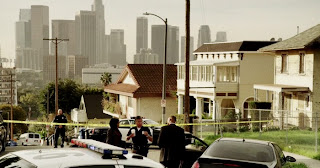 
1) Beautiful scene with Coop and his former FTO Hicks (guest star Gerald McRaney). I hope to see more of Hicks and how the always exemplary Michael Cudlitz plays out Coop's reflection on his career and life.

2) The attention to police detail could not be missed during this episode, even by the most casual viewer. Coop keeps his hand on the door while questioning Road Runner at the traffic stop; Lucero tells Coop in that same scene, "I can't see his hands." Another example is Ben touching the back of Sammy's leg to let him know exactly where he was and was ready to make entry into the community center.


"Everybody here is a witness. Problem is no one can speak English." Babel. Watch it at least twice.