Comedic, dramatic, raw. SouthLAnd season five delivers what it promised. We are getting to the very soul of our characters.

With a heartfelt script by Heather Zuhlke and sterling direction by J. Michael Muro, we see why the title of the episode was "Heroes," each character in their own way, in their own minds acting heroically.

It was refreshing to see Lydia and Terrell making attempts at co-parenting. And Lydia finally having a picture of Christopher on her desk at work. As she and Ruben investigate the murder of a John Doe dead body, it's the first time we've seen the duo be snippy with one another over how an investigation should proceed. Lydia sticking with procedure ("I'm gonna go over here and check this haystack"); Ruben seeming apathetic at their futile attempts. Lydia's heroism is she does not break on the outside. Ever. Despite all odds against her. 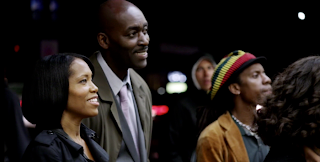 This week we got "good" Ben for the most part. He had moments of levity ("Chuck Norris likes his meat so rare he eats unicorns"), talked down a jumper from a bridge, had some funny remarks about a retiring hooker and was not as obnoxious to Sammy. The affair with Elena cannot possibly end well even though he did seem to put her brother in his place concerning them.  Ben's heroism is he is capable of doing whatever it takes to be an excellent cop; the dark side of life just seems to be a strong lure for him. 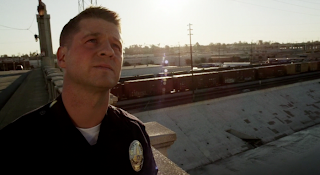 Sammy's guilt over lying about the tape (and I think subtlety over his divorce from Tammi and perhaps his fears he is not a good enough father to Nate) is consuming him.  It took the hooker's retirement party speech for him to have a complete revelation. As he's talking to Nate later about biting other kids at school, he says, "You can't lie. Good boys don't lie." This cannot end well either. Sammy's heroism is he is determined to do the right thing. It's much easier to let the wrong thing that got you out of trouble continue. The courage comes when you stand up and try to correct it. 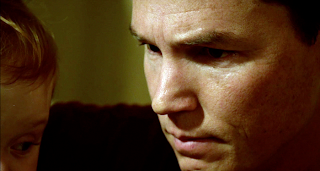 I loved Dewey's daughter Rae Ann joining the force and having to pull a shift with him. I also loved the insights into Dewey as a dad. Dewey's heroism is he has always been a good cop... when he was sober. C. Thomas Howell plays Dewey to perfection; whether it be the boisterous, totally un-PC Dewey or the more serious one who truly wants to do his job and carries the weight of it so deeply in his heart. 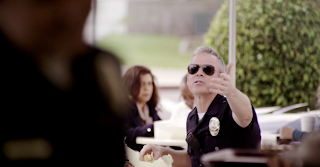 The absolute soul and hero of this episode was John Cooper. I've run out of adjectives to describe how superlative Michael Cudlitz is as an actor. He had good company this week in guest star Gerald McRaney. Coop, unlike Sammy, doesn't have to feel guilty about doing the right thing. He always does. Always. Continual heroism. For example, I'm confident the only reason Coop went to visit his dying father in prison was so the church his dad offered money to if he visited would get that donation. I think Coop had resolved within himself his "issues" with his dad at the parole board hearing back in season three.

Coop's father did manage to get in one final insult during their visit, clearly not wanting to make peace with Coop but to get in one last verbal blow to the son who ensured he would die in prison. What Coop whispers to his father before he left his room was unheard by the audience; as it should have been. SouthLAnd is noted for what is left unsaid and this moment was far too private and intimate to be shared with anyone besides the participants. 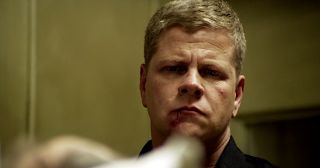 The apex of the episode was at the end, where Coop and his former TO Hicks (McRaney) finally talk, this after a day of Hicks being forcibly cuffed at Cooper's home to ensure he would sober up and not try again to eat his gun. McRaney is in his underwear and his performance is stripped down as well; raw, honest, reflecting on a declining life after retirement. "I don't know how I got here...this isn't how it's supposed to be" he tells Coop, "I was good once, wasn't I?" Coop shares an incident when he was a P2 where he and his partner were so scared until Hicks rolled up. Coop says, "When I saw you, I knew I was gonna be okay...you were a god to me." Coop couldn't save his biological dad from his demons and the harm they inflicted on his life but he will do everything within his power to save his surrogate dad from his. This scene was brilliant and practically Shakespearean. Thank you Michael, Gerald, Heather and Jimmy for this gift to us. 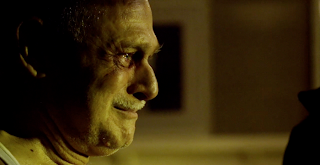 SouthLAnd is brilliance all around. Flawless from the camera crew to the producers and everyone in between. It truly is a unique drama.

Three more episodes in season five. Watch and bask in its luminosity. Wednesdays, 10/9C. TNT.
Posted by SouthLAndFirstTeam at 7:38 PM